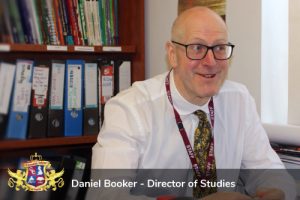 Daniel Booker is our Director of Studies. He has been involved in the ELT industry since 1991, initially teaching and leading activities for predominately European juniors on seasonal holiday programmes. Then he taught English to teens in a French convent near Calais, and worked for International House Schools in Ukraine and Portugal teaching general and examination English to adults and juniors. He also specialised in business English for in-business classes, working with Hitachi, Philip Morris, Credit Lyonnais, JPMorgan, and numerous other banking and telecommunication companies.

After 6 years running a Kaplan school, he joined Cavendish School of English in the autumn of 2015 where he has established a successful observational programme, a new curriculum, course materials, and a CPD culture that promotes reflective teaching. He is also a former oral and writing examiner for the British Council, Cambridge International Examinations and IELTS.

You can ask him anything you want to know about your studies. He is always friendly and easy to talk to. We have asked him to complete the following sentences to find out a bit more about his personality. These are his answers:

When I was younger I wanted to be…

Walt Disney because he masterminded an empire!

If I could be an animal I would be…

a cat because they are independent and too clever for their own good!