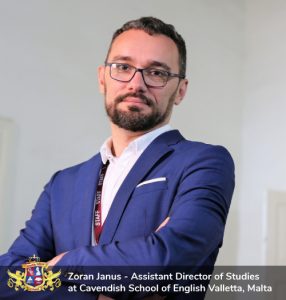 Zoran has been teaching and working in education since 1999. He taught English as a foreign language in Serbia at primary and secondary schools, where he was a school principal for 9 years as well. Having a passion for travelling, he decided to combine pleasure and work, so he moved first to Turkey and then, in summer 2014, became a member of the Cavendish UK team. It was in summer 2015 when Cavendish Malta opened its door for him. He is now the Assistant Director of Studies. He spends part of his time in the office but also teaches in the afternoons.

Tell me one thing that not many people know about you…

Something that not many people know about me is that I was a refugee, which I can say was a turning point in my life.

What did you want to be when you were a child?

When I was younger I wanted to be… (believe it or not) a teacher.

1 famous person (dead or alive) you would invite to a dinner party.